Senator Boyer’s November 13th article in the Capital Times against defunding the police lacks truth, facts, and reality.  Of course everyone wants safe neighborhoods and safe communities where people are able to go outside their homes after dark and not be afraid. But Blacks can’t go outside their doors in the daylight without fear since 1619. Of course no one wants to see their business or homes go up in flames. Blacks have watched their homes and business go up in flames in Greenwood, OK where the white community massacred Blacks and burned down Black Wall Street with the help of the police (1921). Or Rosewood, Florida where the white community massacred Blacks and burned down their town while police watched (1923).  And Cicero, Illinois where whites burned down an entire apartment building leaving other whites homeless so a Black family could not move in (1951). Chicago police executed Fred Hampton asleep in his bed (1969). Philadelphia police dropped a bomb from a plane on a house in a Black neighborhood in 1985 killing five children and six adults and burning down a six-block area. Most Blacks know this history. Did you? 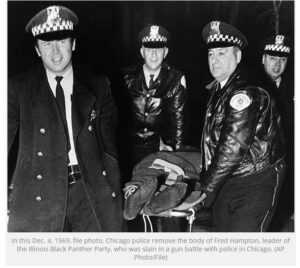 Who has been arrested for burning down the Minneapolis police station and other arsons, destruction, and theft in these uprisings? White people. Who has been driving their cars into peaceful, lawful protesters?  White people including police. Who has been arrested for shooting legal protesters in Kenosha, Wi?  A white boy – who is suddenly a hero. Just like the “Ferguson effect” the “Minneapolis effect” is a myth. The “Ferguson effect” never occurred but it was an excuse for the police failure to protect people in Black neighborhoods. The so called “Minneapolis effect” is an excuse to not hold police accountable for their own violence.

Boyer falsely equates more police with less crime. Crime is not related to the number of police but to economic and political conditions. When the income gap between the “haves” and “have nots” grows wider, as it has been doing since 1980, society become unstable. As the “have nots” grow in number and misery increases, outbreaks of anger justifiably occur.

Phoenix ranked first in OIS (44) with the next highest city being Los Angeles at 14, Las Vegas at 11, and Columbus at 10. Other local cities also placed in the list of cities with the most OIS incidents in 2018 – Mesa had 7 and Tucson 6.

When comparing for size of population, Austin, Houston and San Antonio, TX were most like Phoenix but ranked 14, 15 and 16 respectively. The New York Department had .05 fatal OIS per 100,000 population compared to Phoenix at 1.44, Mesa at 1.46, Tucson at 1.13. Phoenix, Mesa, and Tucson were among the 20 agencies with the highest fatal OIS rates.

After comparing for population, they also looked at violent crime rates to see if that impacted the fatal OIS rate per 1,000 violent crimes. Hawaii took the prize with 9.22 but Mesa was second with 3.46; Phoenix ranked seventh with 2.12 and Tucson eleventh with 1.50.

Comparing Phoenix to the rest of Arizona with population-adjusted statistics, Phoenix ranked seventh at 1.44. Douglas shot to the top at 6.09; Kingman ranked second with 3.45. Then Casa Grande dropped down to 1.92 and the rate declined from there. When compared to other Arizona cities by the amount of violent crime in the jurisdiction, Buckeye is the top gun with 3.16, then Douglas with 2.82. Phoenix ranks twelfth with Tempe being the lowest. So in fact cops in Phoenix and other Arizona cities seem quite happy to pull the trigger.

In addition to the shooting records and the failure to meet international standards, 50% of the Border Patrol belonged to the Facebook page that spewed racist ideology against immigrants. Ninety percent of Phoenix P.D. belong to PLEA that fights against every attempt to hold officers accountable for their misdeeds. Southern and Northern police forces are filled with neo-Nazi followers, Ku Klux Klan members, and white Supremacists. We are not talking a few rotten apples. We are talking a poisoned tree.

Policing started out as slave patrols hired by plantation owners to protect what they claimed was their property – Africans running for their lives. Those patrols evolved into the police, which especially in the South were full of Klansman who were doing the same job but now with a badge and lawful authority. Most Black people know this; most white people do not. So Black people have a bone-deep reason to distrust police. In the North, policing was done by Pinkerton guards hired by corporations to beat poor workers striking for decent pay and working conditions.  Amazon has hired Pinkerton’s in Europe today to surveil employees interested in organizing a union. Policing is about protection of property not people.

For at least a 100 years, the police have had the wrong ideas about policing, that brute force and militarization was the best path, and those ideas continue today in the Phoenix PD.  After the Watts uprising in 1965, then President Lyndon B. Johnson commissioned a study that culminated in a report in 1967 called, “The Challenge of Crime in a Free Society.” That report suggested more than 200 hundred specific policy changes for Department of Justice (DOJ), state governments, civic organizations, religious institutions, and business groups. The report discussed what caused the problem in the first place: poverty; degraded social services; widespread distrust of the police – just like today.

But rather than follow those recommendations, the police militarized. Budgets ballooned. That money is taken from people – homeless, health care, infrastructure, education.  You see the result. Lack of affordable housing, inability to deal with the pandemic, lack of access to broad band especially in rural areas, roads and bridges in disrepair, education funding stuck at 2008 levels.

That money has not brought all citizens police protection. To some it has brought only an occupying army. Reform has failed. Anti-bias training has failed. The last vote for the independent police review board in Phoenix failed.  Phoenix continues to pay taxpayer money every time the police lose a lawsuit.  So deduct the money, both for lawyers and to pay the victim, from the police budget. They must pay the consequences for violating the law.  Make every officer carry individual malpractice insurance like doctors and lawyers do. They should be responsible for their own misbehavior – not the taxpayers.  The 1965 Kerner Commission called for “a revolution in the way America thinks about crime.” Defund the Police may be that revolution.

Defund the police is the revolution we need